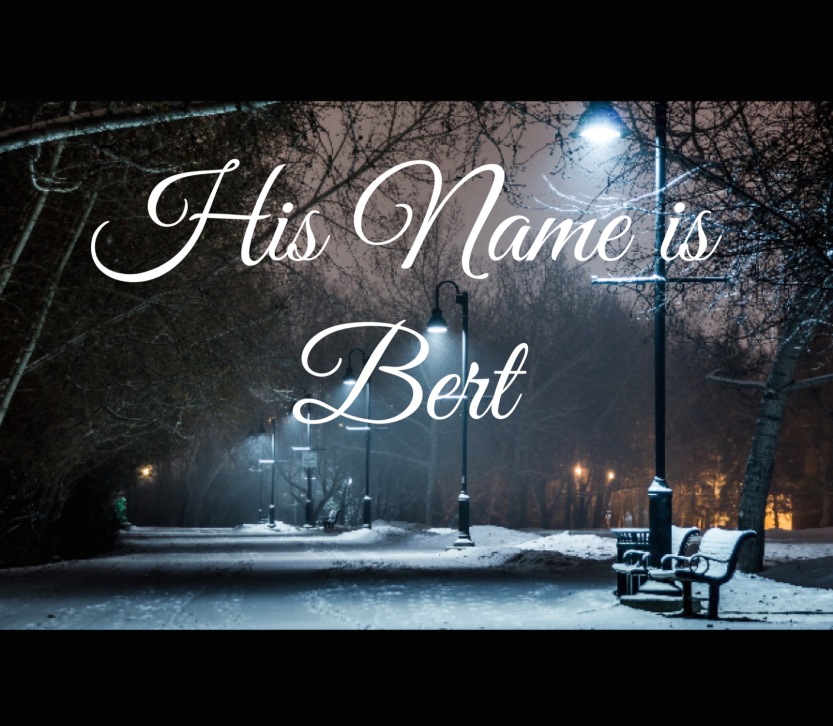 It became apparent that Bert had no one.  He asked me to call one of his sons.  I had a wonderful conversation with him and I could hear his little daughter playing in the background.  I could tell that he was a great father and that Bert had helped to raise a great man.  I could also tell by the sound of his voice that he was weary.  One more call about his father, one more painful reminder of all the hurt, the broken promises and the pain that drove him to obviously need separation, for his own well being.  A choice that I’m sure was extremely painful.  He said he would visit as soon as he could find time, but something told me that would not actually happen.  And it appeared I was right.

Bert was no stranger to the emergency room.  He was affectionately referred to by staff as the ‘urban outdoors-man’ which was a fitting title for the jovial homeless man that seemed to be able to ingratiate himself to everyone from the caretaker to the doctors.  He treats people kindly and a wise crack is never far from his lips.  From watching him in the hospital I could tell that he may be a bit of a pain in the butt occasionally, but never because he was rude or demanding, more because people had work to do and once Bert got going it could be hard to get away.

I was expecting him to be released as soon as he sobered up, but I was shocked to learn the doctor believed there was a much bigger problem than Bert just falling down because he was intoxicated.  Trusting me with his life; the good, the bad and the ugly, was something Bert began to do.  He instructed doctors to share freely with me anything about his medical history I wanted to know, and was adamant that I stay in the room whenever a doctor came in. “No secrets from Layners (as he had taken to calling me – an improvement from Leanne).  She’s the daughter I never had”.  Eventually all the tests came back and they showed his spinal cord was crushing the nerves at the base of the brain and this was causing rapidly progressing sensation loss in his right arm. It took a total of 11 days to get this diagnosis.  Surgery was the only option and it came with no guarantees and many risks including full paralysis.

During these 11 days, I was added as the emergency contact on his medical files and Bert memorized my phone number.   He used it often; usually because he needed cigarettes, but often because he was bored. I began to see the signs of metal illness more clearly.  He was not drinking as much and so some of the behaviours I had chalked up to his alcoholism were becoming more clear.  He would often call a few times a day telling me various stories – slightly different than the one he had called about an hour earlier.  The stories began to get grander in nature; vivid stories about him being orphaned at twelve years old and digging his mother’s grave, and stories about being an RCMP officer because it was his mothers dying wish on his 30th birthday.  The only story I ever had corroborated, was that he was a concrete worker.  I didn’t know what to believe much of the time, but I knew he was suffering from  more than an addiction –  this was something much more complex.

I began to wonder if he could ever work again, which was the only reason he had agreed to get the surgery. He wanted to drive an 18-wheeler to Alaska as he “used to do” and he couldn’t switch gears without full use of his right hand. And then my own personal struggle began.  Did I tell him the truth and try and correct him, or go along with this tale so that he would agree to this extremely risky surgery? Morally, I felt like a fraud.  I wanted him to have the surgery, but knew it would not fulfill the the fantasy his mind had created, and I wasn’t sure if he would agree to it if he knew the truth.  I remembered my beloved grandfather who suffered with Parkinson’s, laying in an extended care facility bed, asking me to pick the chicken’s eggs.   My attempts in trying to show him there were no chickens, were met with greater agitation.  Finally, I got up and picked imaginary eggs and brought them back to him.  And just like that he relaxed and all was right in his world and we went on to have a great visit.  I decided that it was better to enter into his world, whatever world that was, and be present, so that we could be together – and never did I regret that choice.  And I decided to do the same with Bert.  I wasn’t going to be able to level with him, so I might as well just be present with him and dream of what it would be like to chain up an 18-wheeler and drive across the Alaska ice fields again.

When I would pop by, I would almost always find him sitting outside on the bench, in the freezing cold, chatting with someone.  Anyone.  He is the most social creature I have ever met.  Bert has never met a stranger.

The 11 days in the hospital were significant and had brought some health back to Bert.  I would hazard a guess that it’s the longest he’s gone without alcohol probably in years (or at least a significant reduction in intake).   He had clean hospital pj’s every day.  He had a bed.  He had three square meals.  He had access to a shower.  He had regular visits with me and my family.  And he had my friend Lauren.   She was in the middle of opening her new salon, on top of being a mother of four (soon to be five!) and she gave up her dinner hour to come to the hospital and give Bert a much needed hair cut and trim of his unruly beard.  Despite the fact that he was actually in the worst physical health of his life, he looked like he was in the best.  A new lease on life.

The doctors, nurses and social workers at the hospital had become like friends to me.  Recognizing that I was as close to family, they patiently helped me sort my way though facts and not quite facts; things that may have been forgotten or misremembered, or omitted all together.  Bert’s medical problem was so emergent that a Neurologist who hasn’t seen a new patient in two years, agreed to operate on Bert. And he agreed to the risky procedure. With nothing left for the hospital to offer him while he waited for surgery, they released him. Bert needed to stash a duffel bag full of clothes at my place because he had no where safe to keep them back out on the streets, so he waited for me at the hospital until I was finished work.

I saw him sitting uncharasterically, inside and alone.  Quietly. Watching out the window for me to pull up.  He was smiling, but I could the worry behind his eyes.  He was pensive; thoughtful even.   He grabbed his duffel and came out to greet me with a huge hug. His winter jacket was clean for the first time since he received it.  I inhaled the scent of fresh laundry and the unmistakable aroma of Zest soap.  Smells that were totally foreign to him.  He smelled like I remember my dear grandfather smelling after he showered and shaved in the morning.  Bert’s hair was combed and cut, his beard was trim and clean.  He was well rested, well fed and I think possibly sober.  All these things I knew, were about to come to an abrupt end.  I wished the hospital could keep him there; but hospitals are not homeless shelters.  I was keenly aware the hospital staff had already kept him longer than they would have kept someone else who had a home to go and recuperate in.  They had really gone above and beyond.

I said my goodbye and he closed my door; promising to call me.  I looked in my rear view mirror as I drove away and saw him waving at me.  Overcome with emotion, tears started pouring down my cheeks.  I did a lap around the parking lot and went back to the place where he still stood.  I just needed to see him one more time like this, to preserve this fragile memory.  I got out of my van and hugged him again.  He kept assuring me that he was going to be all right and patting my head that was resting against his chest – just like my own grandpa had done so many times when I was sad.  He was not concerned for himself; he was worried about me.  It was as if he was reading my mind.  Where would he sleep that cold November night?  Would he immediately turn back to the bottle that had a tight grip on his life?  What was to become of him?

His Name is Bert